Great Day at the Beach 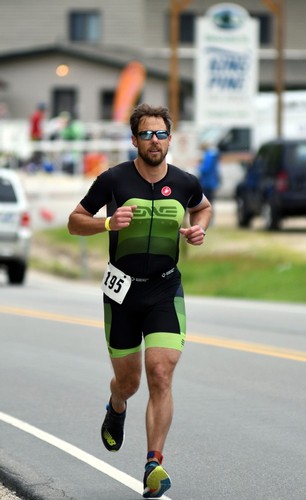 Very excited to return to Ironman 70.3 Maine for my second attempt.  After a rough start to the season with a nagging calf injury, I was ready to see how the last few months of injury-free training would pay off.  The weather the morning of the race was perfect, though the ocean swells were really impressive.  Hit the cold ocean water (64) and started the swim.  Your usual ironman washing machine, but the large rollers really slowed the pace.  Came out of the water about 4 minutes slower than last year.  Time to push!

Run to transition is about a 1/10 of mile, uphill of course. Did the transition thing and was off.  My average swim and large meant I was consistently passing others on the bike, which is a definite confidence boost.  Course was mostly rolling hills, with only a few big up and downs.  Great Maine countryside scenery and great weather for a ride.  Finished the bike leg in 2:28, an almost 10-minute improvement from last year.

Did the second transition thing and was off.  Run course was a lot like the bike, mostly rolling with only one big up and down.  Finished the run in 1:33, about 3 minutes faster than last year.  Total race time of 4:50:32 and a new PR by almost 10 minutes!  Finished 79 OA out of 1836 finishers!

Walking away from the finish area after my race I was lucky enough to catch ENVE teammate Eric Kossen come running into the finish strong.  ENVE!