A Better Ride Than Result 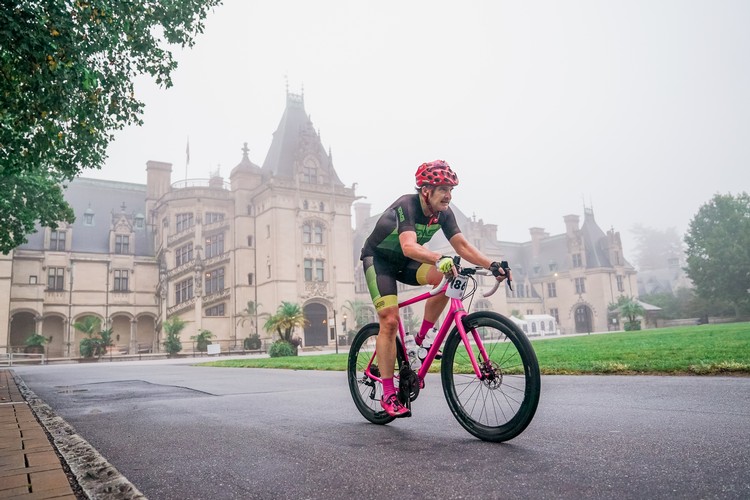 Had been looking forward to riding on the Biltmore Grounds ever since watching the cyclocross nationals that were there (2016?) on TV.  When I found out about the gravel grinder, I thought it would be a great way to ride there and was eager to take my children and wife to see the estate as my oldest two girls have read some of the Serafina books which are set at the Biltmore.


We piled everyone into the van on Friday and drove to Asheville.  My oldest son complained that his stomach hurt a few times but was otherwise ok.  We drove by the Friday Night Drum Circle at Pritchard Park, but I couldn't convince my wife that it was a great idea to unleash the 5 kids into the drumming dancing mosh after their bedtime so we just drove by and went to our hotel in Biltmore Village.  We got in the parking lot, everyone piled out and my son had gone about 20 feet when he leaned over and threw up his lunch and dinner in by the curb.  An inauspicious start to the weekend and left me worried about what maladie they might be plotting to give to me, but despite it, everyone went to bed really well.  Though I did bring in my bike washing bucket and it did get used (at least once or twice that night)!


Saturday was a downtown Asheville walkabout and lunch.  Went to packet pickup and got my stuff (placard numbers across the handlebars... Don't get me started.) Went to dinner down in Biltmore Park and were going to see Queen Bee and the Honeylovers at an outside concert, but had a few lightning strikes before we got there and I guess that was why it was cancelled.  A little before 10 pm finally have people down to bed.  Head outside and make a few adjustments, wash and lube the bike in the hotel parking lot.


Sun am, rode the bike over from the hotel to the Biltmore so my wife and the kids could head over in the van after a slightly more leisurely breakfast.  At the race by 0700 for a 0745 start.  Big mix of bikes, a lot more mountain bikes than I would have anticipated.  It consisted on a loop on the grounds including swinging past the front of the house itself.  There are two climbs (not climbs like mountain climbs) but punchy little climbs that served to split things into a fast group and others.  Descending down from these it was wet in sections and I probably descended a bit too cautiously - not Frankie Valle cautious, but still too cautious to not put myself at a bit of a disadvantage.  Then it goes back toward the start finish line and there is a small connector section of dirt and a bridge that puts you on the gravel loop.


The gravel /dirt loop has a flat section, then a longer mild but sustained climb.  At the top there is an aid/SAG station and for a little while you are on an open plateau,  a little exposed to wind, but honestly it never was that significant.  Then there is a double track descent through woods and across the base of the vineyards, a little switchback climb to another little plateau by the vineyards, and then some really chunky heavy gravel where there really was not a good line, especially in the early laps.  You dive down a short steep section of gravel which got a little sketchy because the less comfortable would really slow down or even stop and walk there.  Cross a short trestle-like crossing and there is a short but steep little climb where I saw more than one person dump it as they spun out or did not take a good line with good momentum.  Another descent through the woods and another steeper drop at the bottom of it, a little rutted, but better traction than the earlier gravel descent and then a turn to get back to the bridge to complete a gravel lap.   For the 60 mile, we did the initial paved section and then 8 loops on the gravel.


The looped nature was nice in that you developed a better feel for the best line as the ride went on and it also put you on the course with people moving at a slower pace and as a result, you saw a lot more people than you ever would on a point to point race without any loop.  The drawback is obviously as alluded to above, there were rare sections where the speed or technical aspect was enough to challenge the less advanced riders and as a result, even if you were more comfortable in those parts, you could not always go wide open through there, but in terms of atmosphere, I think the benefit of frequently seeing people as you were passing them far outweighed any minor hindrances.


Overall felt like I rode strong and consistent throughout with my lap times and wattage pretty consistent throughout.  Had a couple minor technical things including one where I finally had to just snap off a bottle cage.  They cost me a few minutes and probably a few places in both the overall and AG, but there was nothing like issues that I have had in some of my other rides this year.  Hit the finish line and rode around for a while til I found the kids at a playground on the estate.  Did a parking lot shower and change of clothes and we headed over to the "Big House," for the tour.  It was nice, mostly because the kids were able to compare there imagined versions (from reading some of the Serafina books) to the real thing.  For me the house didn't really give off a great or luxurious vibe, mostly just an old one.  I admittedly have my own feelings about extreme wealth disparity that probably affect my perception of it as well.  That said, I enjoyed getting the kids lunch there and especially enjoyed how much they seemed to enjoy the milkshakes that they split.


Already thinking about doing it again next year.  Going to be a NICA coach for a new team as South Carolina will be in its first league year within NICA in 2020, but if there is not a race during the Biltmore Gravel Grinder, I think I may come back with my oldest daughter and ride a shorter option with her on MTB.  It seems like it would be a very friendly course for younger riders given the paved sections being entirely on the estate and that the gravel/dirt loop is neither painfully steep nor super technical.


Rode the my UPPER on ENVE AR 4.5s and Schwalbe G-ONEs and it was a perfect combo with no flats.  Lightweight on the climbs and fast enough on the flats and the beginning road section.  Definitely a recommended ride from me.