February 09, 2020 - Race was going great until a rider crashed right in front of me causing three of us to go down, seat post snapped and my friend had an AC separation. That was it. 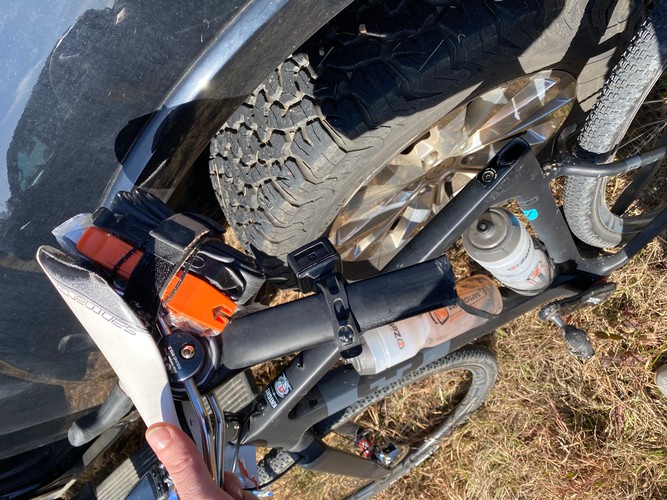 Round 2 of the Mississippi Gravel Cup took place at Camp Shelby down in Southern Mississippi. The weather was awesome, the course was fantastic and eveyrone had fun. Unfortunately I DNFed due to a crash and snapped seatpost, but still a great day.


I was able to make the selection up the first major climb in the lead group of 10. I was likely the weakest rider of the group but I buried myself to stay with them and did so for about 17 miles. I lost a bottle through a rough section. Knowing I'd need it and that I was already past my limit, I stopped to pick it up and continued on alone. It wasn't long before the chase group caught me and I settled in with them, probably another 10 folks. We were riding strong together and everything was going good. I was feeling it from my effort at the start but felt comfortable with the pace we were carrying. Unfortunately, about mile 35, going through some sort of whoopity whoops, a rider in front of me lost his front wheel. I hit him direclty in the back with my front wheel and went over my bars. My bike was in perfect condition other than my seat post had snapped. My friend who was in town from Texas also went down in the same crash. He didn't fairl so well with a separate AC. The guy who crashed initially hung out for a bit and made sure we were okay. He then went on to finish. I found out a few days later he had several broken ribs from where I had hit him. I hung out with my buddy and we SAGged back to the start to take a DNF. Still have a blast on a great course and beautiful day and the crash and injuries could have been worse. A seatpost is easy to replace and an AC separation and broken ribs, while painful, are not the worst thing that can happen.


To brag a little on my ENVE bars, stem, and wheels, they held up perfectly through the crash. My G23s were still perfectly true, and keep in mind my front wheel had hit a rider's back so hard as to break a few ribs. Those things are rock solid.