The day we all melted

It was Hot. 27% DNF rate I was able to realize all but two of my goals, run the whole marathon, finish under 11 hours. 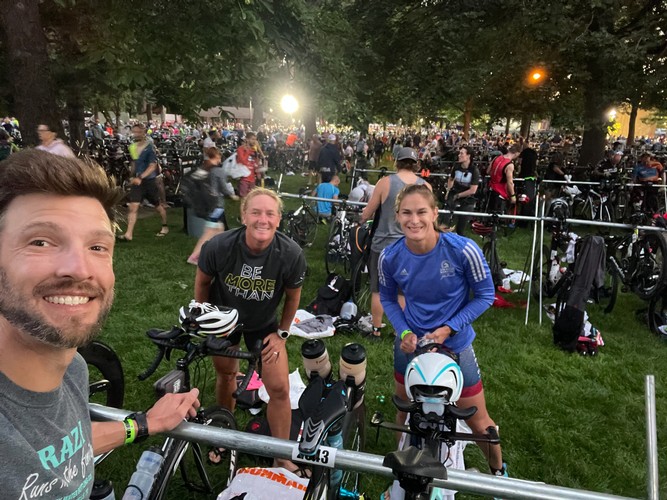 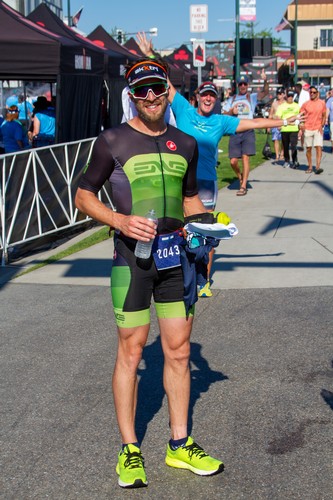 Going into training for this race I set a few goals for myself.


#2 Stay in Aero the whole time on the bike (within reason, Aid stations and tight corners are ok)


#5 Beat everyone I knew out there.

Training this year was unusual. With COVID locking down most things for the majority of my training time, access to weights at the gym and even the pool got hard to come by in the beginning. It was unusally cold outisde at the beginning of the year. Then fast forward to the race venu and it's like COVID never happened and the mention of 'cold' would get you laughed at. All the way up until the day we left Texas to travel to Idaho I'd planned on swimming in my longsleved wetsuit, but at the last minute I grabbed my sleveless one also, just in case.


Our swim a couple of days before the race at the swim course re-enforced that a short wetsuit was definitely the way to go. This water was almost too warm for even that.


Woke up at 3 am ate a breakfast of a plain bagel with peanut butter, 2 eggs with lots of salt, and a cup of coffee.

Drove over to the race venu and setup my transition area, this was actually pretty nice since it was a normal transition instead of the normal Ironman Transition Bags.

We were stagged for swim start based on our swim times. 2 people every 5 seconds. I staged with my wife and two other friends that were doing the race. We all swim almost the same pace so it was great to be surrounded by friends all the way up until we dove in. We started at almost 6:00 on the dot. The swim was pretty spectacular in CdA. Water is clear (not crystal clear but 20' or so visibility) it was a bit warmer than I'd hoped but it was a great swim. I lost track of everyone about my 2nd stroke into the swim. Sighting on the way out was an easy straight line 900 meters out we hit a turn buoy and went straight East into the sun, seeing the next turn buoy only 100 meters away was impossible. So I just followed the flailing splashes of everyone else swimming and almost ran into the buoy. Coming back to shore to complete my first loop there was an enormous yellow gatorade bottle that made it very easy to see where I was supposed to be going, it also felt a lot faster than when I was going out. As I got close to shore I tried to take shallower strokes and when I stood up I ended up being in water about calf deep. A quick run over the timing mat, enough time to clear my goggles off of fog and back into the water to start my second loop I went. It went almost identical to the first loop.


T1 was a quick strip of the wetsuit, cram a pocket full of SIS gels into my ENVE Trikit pocket, strap on my helmet, put on shoes, grab bike and start jogging through transition, until I got to the concrete sidewalk, then I walked to the mount line.


The Bike... This is where things started to get interesting.

If this were a pancake flat bike I would have targetted 180-190 watts for the duration. But because this course had no flat spot at all.... (there was probably one somewhere) my power was very bursty going anywhere from coasting at 40mph to pushing uphill at 563 watts moving 8 mph. The first loop of the course was pretty nice. At the first out and back I was able to see that one of the 4 of us that started together was a few minutes in front of me, and the two others were only a few minutes behind me. Great, I thought to myself I have someone I know to chase down. So I tried to do just that... for the next 100 miles on the bike. The aid stations were well staffed and the volunteers were great with their bottle hand ups. I started with 3 bottles of mix on the bike at about 540 calories each. As I emptied those I'd toss them at the beginning of an aid station and grab a fresh cold bottle of water to spray myself off with grab a few sips and toss before the end of the aid station. I also took a SiS gel every hour which gave me an addition 80 calories. As I started the second loop on the bike I started to catch people that started the swim after me and were slower on the bike. Thankfully everyone was pretty spread out and it wasn't a problem passing anyone. At the same time, it was nice to have a target in front of me to chase down and pass. I zoned out once I got over the bridge heading south on 95 and thankfully snapped out of it when I got passed and looked down to see I was only pushing 120 watts... (Whoopsie, coach won't be happy about that) I brought myself back upto my power numbers grabbed a shot of gel and finished off my last bottle of mix. It was starting to get very hot I noticed and I'd already run through more water at mile 70 than I'd planned on drinking for the whole 112 miles. I grabbed a gatorade and a full water bottle at the next aid station and started noticing people pulled off on the side of the road sitting or laying in the shade. Then I noticed.. Kris, one of our friends was on the side of the road, HUGE smile on her face but on the side of the road holding her bike. I'd later find out that she broke her derailure hanger, the only reason for the huge smile was... she's just a happy person. I started taking note of the difference in speed between myself and the people I was passing and thankfully realized that I needed to get into a gap before the no passing zone. Knowing that it was coming up I started pushing more power than I should have so I could chase down and pass a group I saw in front of me I was able to get around 6 people, then another 2 when I saw the sign way up in the distance and one other individual that I might.... be able to catch. I started pushing hard, and it paid off, I passed the guy right at the sign to start the No Passing Zone. Now I could take a bit of a breather, I saw someone well ahead of me but realized I'd probably catch them so I was able to spin my legs a bit and recover from that last effort. I caught up to her about 1/2 way down the hill and went from 33mph to 14mph. I could see the number of the bike in front of me and it was a lady that was racked right by me. Sitting up and taking notice of how she was riding I could tell she was very nervious riding down the hill and I gave her a few words of encouragement and told her what to expect with how narrow and where the rumble strip was and when this was all going to be over. I knew from talking to her when we setup Transition in the morning that this was her first Ironman race and tried to re-enforce that she was doing great and to just take it one little chunk at a time. She did speed up substantialy and we finished decending somewhere around 20mph before we exited the No Passing Zone and I was able to ramp back up. I finished the bike portion and to check off one of my goals, I stayed in aero the whole time, except for a couple of turns in town, the aid stations and the no passing/no aero zone.


T2 is where I saw Kris with her broken bike and was able to get a quick status update. Nothing interesting about my transition though I did almost forget sunscreen, thankfully there was a table full on the way out of T2.

The first loop felt great but looking back I went out a little hot on my first 3 miles. At mile 4 I settled in and was able to pace myself appropriately until mile 11. That's when things started to fall apart. My gut was not pleased with the offerings of food and liquids I'd given it and I had to slow down to a walk/run. That lasted until mile 17 when I just decided to throw my nutrition down at an aid station and stop eating. All of a sudden at mile 19 my stomach was happy again and I was able to start running (although quite a bit slower). During the run I made sure and grabbed a cup of ice from each aid station and poured it down the back of my kit in an attempt to help cool me off. There was great crowd support. Lots of spectators out on the course with garden hoses hosing us down, make shift aid stations with pop ice, water hand ups, ice. This was the best crowd support I've ever heard of at a race. It was just miserably hot. I saw numerious participants that had given up and were collapsed in the shade on the side of the run course. I saw medics giving someone an IV just down the street from the golf course resort. One guy passed out while walking (thankfully into grass) about 1/2 a block from an aid station and was immediately surrounded by voluenteers and medics.


I didn't hit my goal of running the whole marathon and after experiencing and looking back at that day, I'm happy I was able to just finish it. I also didn't get under 11 hours, but have the same mentality as running the marathon, I'm just happy to have completed it.


There were a lot of people that DNFd that day 27% to be more precise. The normal DNF rate at an Ironman is 4%. The extreme Iron distance race that I did in Alaska in fridged water and running up and down a ski slope twice had a DNF rate of 21%


Ironman CdA 2021 was a rough race and everyone that competed in it should be proud of how far they made it.